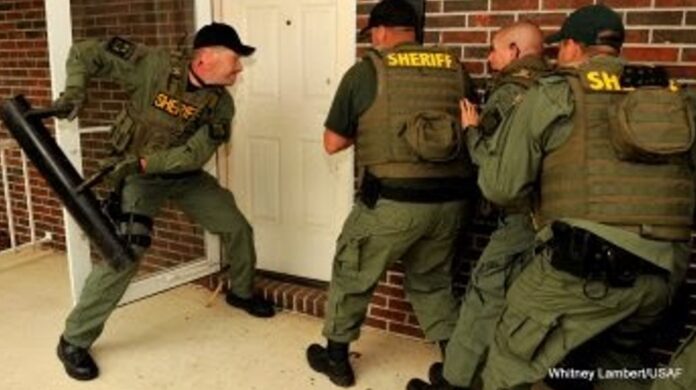 It is important for me to start this article with the words that I am not anti-cop and what is most important, nothing in this article should be interpreted as something having anti-law enforcement. As proof will add the following: my father worked in a state prison system for more than 20 years as an executive, currently retired. Besides that fact, my girlfriend had different law enforcement positions for three years and is presently in the police academy. Moreover, very soon, she is going to be an SRO in a local school system. With that in mind, I am concerned about the possibility of a no-knock raid.

The reality that I know the policing techniques really increases my distaste towards poor training, poor policies, poor execution, and of course, attempts not to notice or cover up malfeasance.

Not recently, there was a case connected with a couple (male 59, female 58). They were no-knock raid subjects at their home. The first officer shot the dog (pit bull) through the door, both wife and physically disabled husband are dead. The thing is that an informant pointed out that they were running a black tar heroin empire straight out of their house. Important to mention that the same informant person was involved in a test buy.

Just think for a while, according to the police information, no black tar heroin was found, only a very small amount of marijuana was there. This fact is used to justify this drug raid. None of the house owners ever had any type of prior criminal drug violence convictions.

Police officers say that none of them had a body camera on them. It is important to mention that 4 of 6 police officers were wounded; fortunately, none of them got a fatal wound. As these people had no prior criminal history, it is possible that they may have assumed someone is trying to invade their home. Besides, a few weeks before, in Huston, a home invention made real national news. In this invention case, the homeowner defended his house properly by using an AK-47 to put 4 of 5 invaders into pine boxes. I don’t really believe that these people haven’t known it. It is possible that they have well-discussed inventions and planned action strategies in case if someone tries to invade their home.

One of the Huston Police Chief is an expressed proponent of the gun protocol. He claims this to be another reason to pay attention and improve gun control measures. To be honest, because of these tactics, the amount of concern somewhat increases, as police can use unproven data from different informants and perform a no-knock raid.

There were cases when police caught bullets during a raid on a couple of non-felons. And this, as a result, strongly increases demands to remove lawfully-owned guns from citizens. According to this statement, this will lead to low enforcement agents’ protection.

In opposition to this, in case if the police officers raid the wrong houses, and if the wrongly invaded citizen protects himself by fighting back without dying, the citizen will eventually face certain charges.

In 2013 there was a case in which another house became a target of a police no-knock raid. This raid also was based on unverified and poorly vetted information. Of course, the house owner thought it was an invention. As a result, he fought back and shot the police officer in the head. The officer was fatally wounded. The house owner was shocked when he understood it was a police raid and surrendered immediately. He faced a first-degree murder charge. If we address some statistics, we will see the following picture: in the case of no-knock raids performed by ACLU, 60% of SWAT, there was discovered zero drug amount during no-knock raids. If we take into account only these statistics, all this indicates overuse of no-know raids and SWAT.

In my opinion, the most acceptable and easiest way to protect law enforcement officers is to stop performing no-knock raids on those people who might only fit a profile that is based on really poor data.

In the previously discussed case, the couple was not ready for the raid. Even though the husband suffered from physical disabilities, he managed to shoot and wound four officers with a .357 Magnum gun.

The gun he shot the officers from was not with him before he was killed. The reality is that the house owner’s pitbull bought a bit of time.

It is important to mention that none of the officers was bitten by the dog; according to the police report, they immediately shot the dog as it was the first shot of the encounter.

Another house owner-the wife, was fighting back with one of the attackers and later was shot and fatally wounded by another police officer. Just imagine another story when someone who is well-prepared and immediately responds with a different gun that has better capacity than .357 Magnum. Maybe someone with a personal gun, like an AK-47.

I have two 5.56 ARs, a taser, Glock 22 at my house. Besides that, on the bedside have a gear tree with a plate carrier, a .300 BLK ARR pistol, KSG shotgun loaded with Aguila mini shells (capacity 25), and my M&P 9mm, when it isn’t on my hip. The reason for this is the ability to have very quick access to guns in case of urgency. Together with my girlfriend we have discussed and planned all the acts and who does what in such unexpected situations. We have understood that in case of such an encounter, our chances to live are not that high. On the other hand, not resisting can mean death for every one of us, including children. Having all the guns in mind, I don’t think it is a good idea for invaders to choose as their victims.

As per ABC local, from Huston Police Officer Union President;

“We are sick and tired of having dirtbags trying to take our lives when all we’re trying to do is protect this community and protect our families. Enough is enough. If you are the ones out there spreading the rhetoric that police officers are the enemy, well, just know we all have got your number now. We are going to be keeping track of all of y’all, and we are going to make sure to hold you accountable every time you stir the pot on our police officers.”

To be honest, I consider these kinds of messages as alarming comments, as to me, they much sound like retribution that is in the process. I say that because this all seems to be like another botched SWAT raid. A raid that was performed based on unverified and unreliable information and, of course, a wrong house that had no real investigation.

It is very important for all of us to understand that we, as citizens, have all the rights to doubt and question this kind of technique. We have the right to discuss and question choices and policing practices that we find inadequate or unacceptable for us. This is a serious question when it comes to those cases that lead to the death of one of the sides. So, this means our rights also include demanding officers be held accountable for the low actions they might take.

It seems to me that the First Amendment can be applied here. Arguably, the statements might come under “threats under color of law.” TITLE 18, U.S.C., SECTION 242.

In case if the good cops speak up, this would be a good solution to this serious problem. The thing is that before performing a no-knock raid without ensuring the information, accuracy can have fatal results and take innocent people’s lives. One thing is certain that they need to accurately review and ensure proper due diligence is performed.

So, to my mind, in these cases, when innocent people die because of poor choices, the malefactors need to be purged. Another improvement that is required is leftist politicians and BLM demonization; it is the stupidity of complicating things.

For those people like me, who respect and like law and order, the people who are connected to the enforcement sphere need assistance, a SWAT team needs Barney Fife in the stack.

Can England finally win a first trophy since 1966?